So we're on day 4 of recording a 5 track EP with the charmers, an up and coming band from the midlands, and we all get in early to set up guitar tones for the day. Suddenly we're hit with an onslaught of ground hum and noises! From nowhere our session descends in to a frenzy of plugging, unplugging, switching on, hair pulling and switching off. Eventually we strike upon a solution, but first let's learn more about the problem...

The lead guitarist (Harry) has his Fender Stratocaster, the rhythm guitarist (Jarrod) is sporting a Fender Mustang. We're going for a rich brit indie sound which is bright, valvey and crunchy. Our references include the Arctic Monkeys, Maccabees, 2 door cinema club.

For our amps we're using a '92 fender Prosonic and a Blackstar Artisan 30 in stereo. We're micing them up with a sm57/ribbon mic combo on the Fender and an sm57/414 combo on the Blackstar.

We've got a ton of foot pedals that we tried out, we've mostly stuck with the blackstar HT-dual, mod + delay pedals, EH - Holy Grail, Route 66 and the humble Boss tuner and chorus at different stages, but there's been an appearance from several other little treats, such as my favourite the Big Muff distortion. 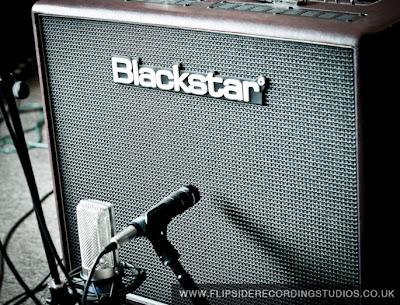 So we're getting great sounds out of our setup. We've swapped cables round to make sure we're getting the best tone, we're on the right pickup, we've got the right pick, the amps are set right, the distortion, modulation... everything is right! except then we send the signal through to both our amps we're hit with a 50/60hertz hum.

Being careful not to knock any settings we start removing things from the chain, the noise dissapears when the guitar is turned down... what does that mean? We unplug amps from the wall and plug it back in somewhere else... no change. We look for ground switches, nothing we can see. We unplug the fender amp and the noise disappears! Hooray, but do we seriously consider changing our recording strategy so we can get a cleaner signal? The thought arises, perhaps it won't matter too much, after all it's not that loud... Someone in the room dismisses this idea as abject failure and we all, all 5 of us continue our search for a solution.

We plug the guitars direct in to amps, simplifying the chain as far as possible. Was that noise there before? Is it acceptable? Is that just amp noise or ground hum... After all this searching one thing becomes clear:

This is infuriating, looking round the room we have about 40 years of experience and several degrees, we're seriously endangering our recording schedule if we spend any more time on this...

Then it happens. Google happens. 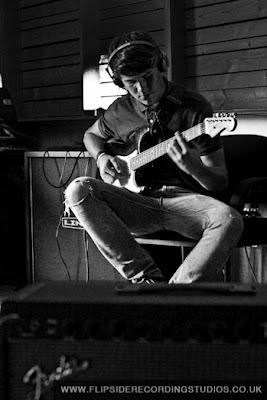 A couple of us take time to google the problem. The first possible solution involves making sure the amps are plugged in to the same wall socket. This doesn't solve the problem, but does seem to reduce some of the noise. We then find a problematic pedal that we remove from the chain. Finally, Harry stumbles across a suggestion to ground the signal just before going to the amp.

I'm guessing Iso means isolation? as in ground? Given my predisposition to not read manuals I guess I'll never find out, I just know that the ground in that pedal seemed to give us glorious tone with no hum or noise...

and so we're back to tracking.